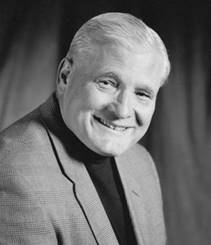 Roman George Hiebing Jr. passed away peacefully on the morning of Tuesday, Feb. 9, 2016, at Agrace HospiceCare in Madison, Wis.

Roman was a first generation college graduate. He was initiated into Lambda Chapter in March 1964, with scroll #447. His drive did not allow him to stop at a bachelor's degree; he fondly recalled his father's perplexed reaction when Roman announced that he would pursue a master's degree in Marketing and Advertising. This degree opened the doors for a long list of business accomplishments. His advertising career began at Leo Burnett in Chicago. Roman worked on the award-winning Schlitz "You only go around once in life," and "Grab the gusto" campaigns. His graduate thesis, "Territorial Marketing and Restaurant Franchises" and success with Brat Und Brau restaurants in Madison caught the eye of Kentucky Fried Chicken, for whom he created memorable slogans such as "Get a bucket of chicken, have a barrel of fun," and "Good bye ho-hum." His final challenge at Leo Burnett was with Pillsbury's Funny Face drink mix. Choo Choo Cherry and Lefty Lemon became part of Americana and helped propel sales for the Kool-Aid competitor.

Roman left Chicago in 1975 and returned to his adopted hometown, Madison, Wisconsin. There he started Hiebing, Hiebing, and Others. This company merged with Stephan and Brady to become the largest in the state. In 1981, Roman formed The Hiebing Group with seven employees. The Hiebing Group (currently Hiebing) grew to be one the dominant marketing and advertising agencies in the Midwest, serving national accounts that included Famous Footwear, Coca Cola, Coors Beer, Kimberly-Clark, JanSport, Culligan, Mercury Marine, Dean Health, Physicians Plus, Wisconsin Power & Light, Diaper Geni, EPIC, and many more.